Review: Tim and the 23s, "Dislocated" 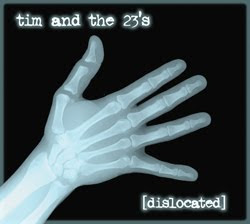 I was sent a copy of a CD by a San Diego rock band, not the obvious review choice for a site dedicated to Philadelphia acoustic music. But like the live Papertrees show (see below), this is a music experience of authenticity and unpretentiousness, a stripped-down recording with acoustic sensibility.

Fronted by songwriter and guitarist Tim Malley, a exile from the Philadelphia coffee shop circuit whose previous work includes a stint in the shock-rock Whiskey Dicks, which also featured Philly folk stalwart Chris Kasper. Kasper also guested on Malley's debut LP, 2006's Tim and the 23s, an credible effort made possible by the input of strong players from the Philly and San Diego music scenes. In the wake of this recording, Malley put together a tight and talented three-piece band with bassist Chris Dutton and drummer Matt Liebowitz. They hit the San Diego bars (for gigs and otherwise) and embarked on several regional tours, forging a close musical bond of straight-up rock with a simple song-centered ethos that shines through on Dislocated (Swell Music, 2009).

From its opening, Dislocated hits with the honest hedonistic rock of "This Party's Gotta Woo!" The lyrics on this and songs like the excellent "Been to California" (with it's great fadeout sheet "I was a mess") and "Gotta Go to Work" express a world-weary knowing: these guys have been around, lived a fun, hard life, are touched by the world they inhabit, but know not to take things too seriously.

Other entries reveal a vibrant sense of humor. Malley references local heroes Ween with his line "didn't believe the roses were free even when they were given to me," and the influence of the "brothers" from New Hope comes across on songs like "Breakfast," the sincere country-folk-rock "Chained to the Line," (co-written by Dan May, now bassist for London pop-punk stars the Spivs [watch their new video here] and for Atomic Suplex, the UK's answer to Bob Log III) and the reggae-esque "Gale Force Winds" and "Mr. Bob Todd." This light-hearted sensibility veers into un-pc territory on "Bad One" (sample lyric: "I slept with your sister, I found her down at the pound") and "Squeel Like a Pig", but never drifts into offensiveness.

Where Malley's debut effort was blighted by some inconsistent production and musicianship, the tight musical comradeship of this 23s iteration perfectly backs up the honest hedonistic rock. Leibowitz's intelligent, well-stated drumming and Dutton's earthy bass-playing combine in a grungey interplay, an ideal platform for Malley's excellent guitar work (see tracks 3, 4, 7, and 8, among others) and strong, forceful vocals.

The striped down sound, unrepentant rock, and existential/humorous lyrics come together perfectly on Dislocated's high-quality final track, "Neighborhood," Malley and co's homage to their friendly SoCal beach town. (Sample lyric: "my friend named Karen's got a friend named Larry and he sleeps on her couch.") When the band sing "we all live in the neighborhood," they make you wish you did too. A Philadelphia return is eagerly anticipated.

"Been to California" from the album Dislocated by Tim and the 23s, live at the Radio Room

a humble attempt to promote, discuss, and review select artists, shows, and albums, and to comment on topics of interest to the Philadelphia acoustic music scene